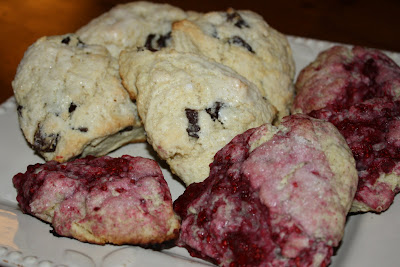 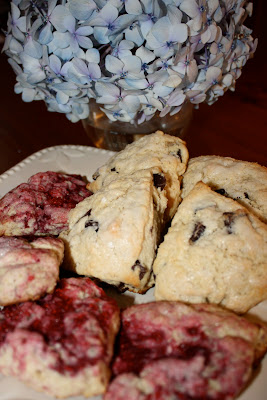 This is the first time I have made scones and I have to say I am quite pleased with the results.  It only took me about a half hour to make them.  A few years ago a few friends gave me a collection of recipes as a going away gift before one of our "military moves."  One of the recipes was for scones and I can't believe I am just now trying it out.  I had to change the recipe slightly to make it "allergy friendly."  Instead of half and half, I used soy milk and of course vegan margarine instead of butter.  The original recipe called for chocolate chips.  Instead, I decided to try raspberries in half of the recipe and milk free chocolate "chunks" in the other half for the chocolate lovers in my family.  The chocolate "chunk" scones were a big hit.  The raspberry scones were a little plain.  So next time, I might add chocolate chunks to the raspberry and maybe a teaspoon of vanilla to the recipe.  We did our taste test when the scones came out of the oven and were still warm.  This is a recipe that will make a nice addition for Mother's Day brunch or for teacher appreciation week and it is easy enough that maybe my husband will attempt to make them for me for Mother's Day.    Enjoy!~
Ingredients:
2 cups flour
5 Tablespoons sugar
1 Tablespoon baking powder
1/2 teaspoon salt
7 Tablespoons margarine (I use Earth Balance Vegan Sticks)
2/3 cup Vanilla Soy Milk
1/3 cup chocolate chunks ( I use Baker's Chocolate Chunks)
1/3 cup frozen raspberries
Directions:
Preheat oven to 425 degrees.  Whisk together flour, sugar, baking powder and salt.  Cut in margarine with a pastry cutter.  Stir in soy milk until just moistened.  Divide dough in half.  Fold in chocolate chunks in one half and raspberries in the other half.
Gently knead dough on lightly floured surface.  Only knead about 5 times.  Shape and pat each half into a one inch thick round.  Cut each into 4 wedges.  Place on baking sheet covered with parchment paper.  Brush top of chocolate chunk wedges with soy milk.  The raspberry wedges will be moist enough and won't need to be brushed with soy milk.  Then, sprinkle sugar onto the tops.
Bake until golden brown for twelve to fifteen minutes.  Let cool for a few minutes and enjoy warm!
Posted by Suzanne at 9:50 PM

Suzanne
I am a mom raising a child with severe food allergies. This blog is a place for me to share my experiences with all the issues that our family has faced and to learn from others. This is a place to learn, share and vent. Please feel free to make comments along the way. 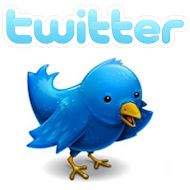